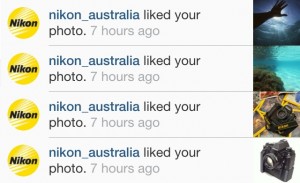 Now that I’ve had a few months playing with Instagram I’m happy to pass some judgement on it. It’s like facebook but without the rubbish and it provides a great way to get some attention. The layout is simple and the square format is actually pretty good (Hasselblad figured this out a long time ago). There is however far too many pictures of what people had for breakfast, lunch and dinner… 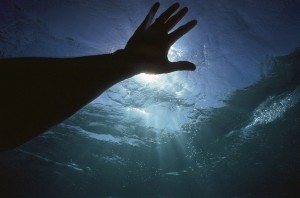 I’ve now got the first underwater roll back and I’m hooked. The images are pretty good, mostly all in focus (hard not to be with the 15mm) and well exposed. There’s a couple of keepers that I’ve placed in the gallery. A great and very different experience taking pictures. Bring on the Adelaide summer and what I suspect will be many a trip to Rapid Bay and Second Valley.

It has been quiet for a while. I’ve been travelling around and just got back from 6 days in Fiji where I ran the first roll through the Nikonos V underwater! A very different experience compared to shooting topside but one I’ll be doing again and again. The roll of film (Velvia 100) is at Atkins for processing and will be ready mid next week. I should also be getting the final Df grip back as well so stay tuned for a big update on that front.

I have just added a page on what I have been working on over the last month. Camera Grips and 3D printing! It started when I received my Df and realised it needed a retro grip. A few sketches later I have made a couple for my Nikonos V which work well. I have now just finished designing a grip for the Df and will be getting it made. My aim is to sell these to anyone who wants them (feel free to drop me an email) and possibly convince Nikon to make a functional one for the Df. The Nikonos V grip will cost around $70 initially with the Df expected to be about $90 (highly dependant on volume etc). Stay tuned, more details to follow.

What’s In An Image?

Strange title, strange post.. Well what is in an image? Often taken for granted in todays information/media hungry world we can see thousands of images a day but few really stick with us. Its been my pursuit in the last few years to capture an image that sticks. I’m not there yet, but that’s the fun of the chase. However the more I look critically at what I’m doing, some interesting observations arise. For example, Google ‘iconic images’. You’ll quickly see that the images that have ‘stuck’ in the world aren’t from the latest and greatest digital camera. They are the results of Leica M3’s and Nikon F3’s loaded with Kodak black and white film (for the most part). Monochrome is certainly king which makes sense, colour is distracting if we really want a powerful image. People and faces are also a common denominator. I’m looking at an unopened roll (120) of Tmax 100 as I type this.. Seascapes/landscapes just won’t cut it. You need emotion, just like a good song really. In fact, music and photography have far more in common that most people realise. Either way, I realise my workflow has to change slightly. Which, for an engineer easily distracted by numbers and specifications is easier said than done as lately I have been designing a few accessories for my Nikon Df and Nikonos-V courtesy of 3D printing (stay tuned). So, with some more time needed looking over old black and white images, the challenge of having a person in every picture seems more and more relevant.

My Nikonos V, after a quick test roll with some paint cards in a plastic box, some fresh O-rings and a new strap, is ready to go under! I’ll be putting Velvia 100 through it in Fiji with a roll of Velvia 50 as back up. Stay tuned! If you’re wondering what the image on the far right is, that’s the view through the DF-11 finder for the 15mm in air (underwater use only).

As the title and picture suggests, I have decided to explore a very different world of photography. The underwater world of Nikonos. This Nikonos V and 15mm f2.8 are the best dedicated underwater (non-SLR) film camera option that was produced by Nikon. It is however, very different from what I am used to above the waves. The camera is a well sealed bullet-proof little rangefinder that has rightly stood out as an excellent product until being discontinued in 2001. It behaves just like a normal camera from 1984 with one big exception, the lens mount. It is not a normal F mount and doesn’t lock into place. Instead it has 2 detents and relies on a good O-ring seal. This means any major movement or disturbance underwater could turn that ‘loving feeling’ into that ‘sinking feeling’ in the space of a few air bubbles. With plenty to learn and a ticket to Fiji I’ll be keen to see what this can produce on Velvia 100. 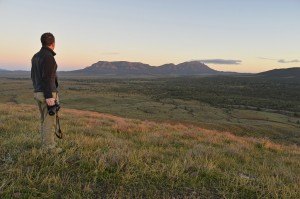 Another quick trip to the Flinders Ranges. As it was only 3 degrees overnight, limited time was spent gazing at the stars as spectacular as they were (a good pair of binoculars can resolve an incredible amount of detail the un-aided eye can’t see!). A few nice images here and there with a cold sunrise over Wilpena Pound. The F5 (in-hand) also came out of its case. More to follow…